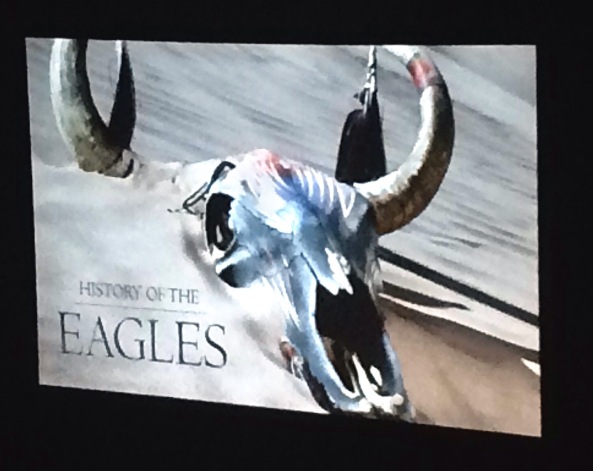 Music, bared back without the drama, showmanship  or fanfare, this is the presentation for an Eagles concert.   Our second Eagles concert, certainly not disappointing and definitely enjoyed by all.  Along with Roger Waters & Pink Floyd,  the Eagles are the only other band we have seen who play a full 3 hour concert, including an interval, no room for support acts here!

We have attended many concerts, across a broad range of genre.   An Eagles concert cannot be compared to other musicians.  Their concerts are about the music.

Casually dressed, and looking like they have just strolled in off the street, Timothy B still sporting his trademark hair, (albeit a little greyer now and complete with goatee), the Eagles arrived to wow their fans.   This band is tight, having played together for so long.  Since 1971, when the band started, through to today, their music is iconic across five decades.   Even though they did split for a while, their music has never lost popularity.

A request from the Eagles, was that smartphones be off and no videos recorded.   Never before have I witnessed a packed Entertainment Centre where the crowd has so much respect for the band, they have complied.

Our seats gave us an overview of most of the seating areas.   To witness a crowd this large sitting, and simply drinking in the music proved the popularity of this band.   Apart from the odd heckler in between songs, the crowd maintained a silence, drinking in every aspect of the music and atmosphere, until breaking out in ear shattering applause at the end or beginning of each song.  Respect.  The Eagles asked for that, and they were given it, in bucket loads.

People stayed in their seats, not standing and blocking others behind then, but sitting which ensured everyone had the opportunity to soak up every note of the music performance.   There were a lot of people singing along in parts, but not loud enough to be heard over the sound of the band.   If you had gone home and put on an Eagles DVD, you wouldn’t know the difference between that and the live show most of the time.

The narration by the band, of their history, was delivered in short bouts between songs, and interjected with numerous quips.

Guitars were changed at the end of songs, with a multitude of different guitars, and the banjo, used in the performance.   Not only were they used, these instruments were brought to life by some very talented musicians.

Seated and starting with the slower sets, they moved onto standing up as the first half progressed.    Some of the best, most well known songs were saved for the encores.   Clever lighting displays also came into play as the intensity of the music increased.

In answer to the Eagles own question, they first asked in 1979, “who is gonna make it, we’ll find out, in the long run….”    There’s no doubt about that one, it’s the Eagles.