Lets hope you’re not feeling a little dusty after indulging in that spectacular dinner last night! Our last full day began early, pre sunrise, as we were collected from our hotel by the engaging Jo, and transported to a sand dune out past the airport. Here, hot drinks and warm damper awaited us as we were about to witness the magic of an outback sunrise. Next, we would be heading into the National Park to the base of Uluru itself. Later today would see us venturing out to Kata Tjuta on an afternoon tour.

The biting desert cold night air which we had briefly tasted ducking from the warmth of our hotel into Jo’s All Terrain vehicle, now enveloped us as we reluctantly left the bus and trudged up the sand dune. The only noise in this expanse was the low murmmuring of voices which were occasionally raised to emphaise how cold each person felt.

We were only a small group, and the walk up the dune was not far. But, that little bit of elevation was going to give us a stunning, uninterrupted view of the sunrise, Uluru and Kata Tjuta. 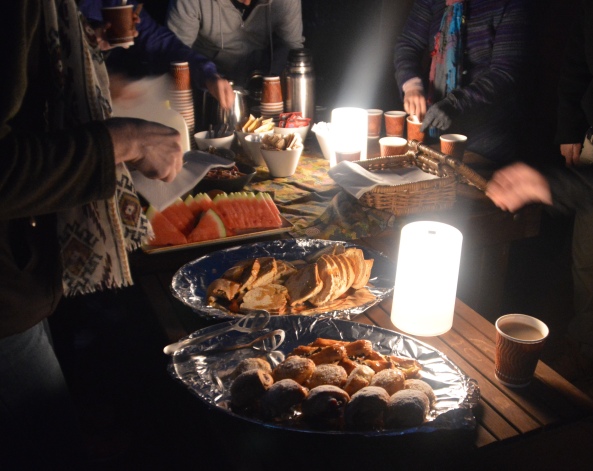 At the top of the dune, Jo gleefully greeted our breakfast cook who had an array of food including warm damper, pastries, fruit and hot water urns, filled with boiling water, ready to warm our chilled innards with a choice of hot beverages.

After loading up with warming drinks, everyone surrounded the gas heaters, trying desperately to breathe heat into numbingly cold bodies.

Its about now you regret being a photographer. Wistfully watching everyone else with one hand hugging a warm cup, the other either tucked deeply into a pocket or held out like a peace offering in front of a gas heater, I tried to encourage my unwilling fingers to operate the camera. It will be worth the effort of taking these photos I told myself. Ignore the cold, just do it.

The sunrise was simply magical. Soon forgetting the cold, you could not help but be mesmerised with the scene unfolding in front of you. Darkness was being tinged with the first rays of light out on the horizon, whilst Jo mingled with her charges, getting to know them and helping with breakfast.

With a gentle ease, the sun slid above the horizon, turning darkness to light as we thanked our chef and headed back to the vehicle for the trip to the base of Uluru.

First stopping at the park gates for clearance, we then drove on to National Park Land, home to the Anangu people. Don’t forget to organise your Park pass prior to arriving, it will cost a mere $25 for the few days you are here and the pass can be loaded on your mobile device for easy access.

The imposing rock grew bigger as we advanced down the road. Finally, we were going to get to witness this monolith up close.

Now Jo is one of the most engaging and heartfelt story tellers I have ever come across. Driving through the park she related stories of Anangu people and their beliefs. Listening as she told us of the history behind certain marks on the rock, you just could not help but be spellbound.

Eventually we arrived at the carpark at the base of the Uluru walk. The Anangu people ask that you respect their wishes and not climb the rock, however, it is open for walking until 26 October 2019 when it will permanently close. There have been many deaths resulting from attempts to climb the rock, dont allow yourself to become a statistical memory.

We had no intention of disrespecting the wishes of the community, therefore we did not climb, not even a short way. There were however a surprising large number of people clambering up the rock. Remember I mentioned the chain that Peter, the Curtin Springs station owner had installed many years ago? Well that is it snaking its way up Uluru. This is the chain Peter and four young men installed over the course of 8 weeks. 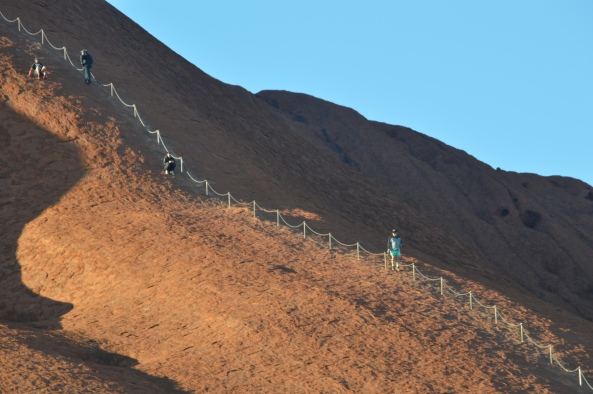 Wandering down the side path, I read the story laid out on the posts along the path about the Mala and Wintalka people, and the fight which resulted in a huge devil dog, Kurpany being sent to destroy the Mala peoples Ima (ceremony). Each story has a lesson to be learned. This one was to teach us that it is important to finish what you start and that you should watch and listen to warnings of danger. 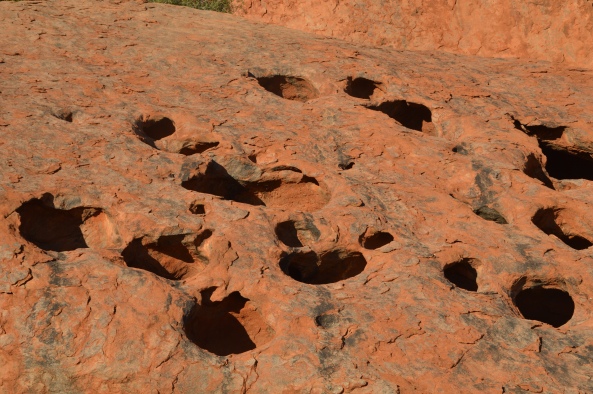 Rock formations are simply fascinating, and as we drove around to the other side of Uluru Jo told more stories of how these formations or holes in the rock occurred.

Around the back of the rock, every person in our group, including at one point a couple of cyclists who were passing through, were intently listening to every animated word. I was completely blown away not only by Jo’s knowledge, but the heartfelt way she delivered these stories, giving them every respect deserved.

We walked the path down into a little oasis of sand and water, tucked in amongst the sandstone rock forming Uluru. This peaceful area was heavy with spiritual presence from generations of the local community.

A cave close by, had sheltered these generations in the past, and the drawings were still there from thousands of years ago. 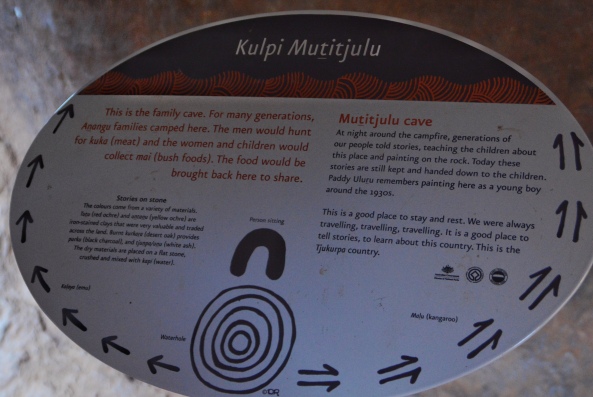 More photos on the facebook page and some on instagram. Simply amazing to see these still clearly showing on the rock face.

The Cave wasn’t fully enclosed and one can only begin to imagine how difficult it would be living in these tough conditions, given our softer lifestyle now.

Our last stop was the Cultural Centre. You need to stop and wander through here, give yourself some time to do so and really soak it all in. Start from around the back and stroll through the tunnel which is cleverly put together, depicting community life over the years. There’s no photography allowed in here, so unfortunately I can not show how amazing this place is. But perhaps thats best left for you to find out yourselves.

Thank you to the Anangu people for allowing us access to this world heritage area. Your generosity in doing so is greatly appreciated. Remembering the words of Bob Randall, one of the traditional owners who has now passed, “We don’t own the land, the land owns us”.

Have a look at Dine Live Travel on Facebook, Instagram and Pinterest for more photos and information. Dine Live Travel is available for business or product promotional work, feel free to contact via message on any platform or email dinelivetravel@yahoo.com.au.