Everyone loves a birthday.  Which meant what better way to spend a lazy Sunday lunch than attending an Italian Restaurants Trattoria to celebrate their 13th birthday.

With so many new venues opening around the city, it is easy for us to constantly be visiting somewhere different, something new.   Today we were to be reminded of those who have been around for years and remain successful.

With the colours of the Italian flag used in the signage, a popular choice amongst the real Italian Restaurants, one was looking forward to the delights on offer.

In true Trattoria style, long tables were laid out within the restaurant, groups of strangers seated next to each other.    First to come out was the garlic bread.   A beautifully soft, very large slice per person.

And then it began.  At first a couple of large pastas appeared at the table, followed up with a smattering of salads and then the pizzas…..

This Italian Salad above was simply superb.   In saying that, all the food was beautifully fresh, no dish was tired or overdone.   Not only superb, this salad was a work of art, encouraging you to eat with your eyes first.  It was almost a shame to destroy it, however with salavia following, one had to test the delights contained upon this plate.

So many different pastas, creamy carbonara to seafood marinara.   And they kept coming, right up until the last person stopped eating.

I will be the first too admit Im not a pizza person. To be honest I would be lucky to have one slice per year, if that.   But, as they say, when in Rome…..

These packed pizzas on an ultra thin base were simply superb.  Tastebuds danced as the juices of these softly handcrafted pizzas filled your mouth.  I do not know how many slices I ate, nor do I know how many different pizzas and pastas there were, however, I do know that after a couple of hours of this continuous meal, we all lost the will to do anything else that day.     Hubby himself, really enjoyed this continuous flow of gastronomic delights.

And then, just in case you still had that square inch of room left in your stomach, out came an alternate drop of dessert, chocolate mousse and baked cheesecake. 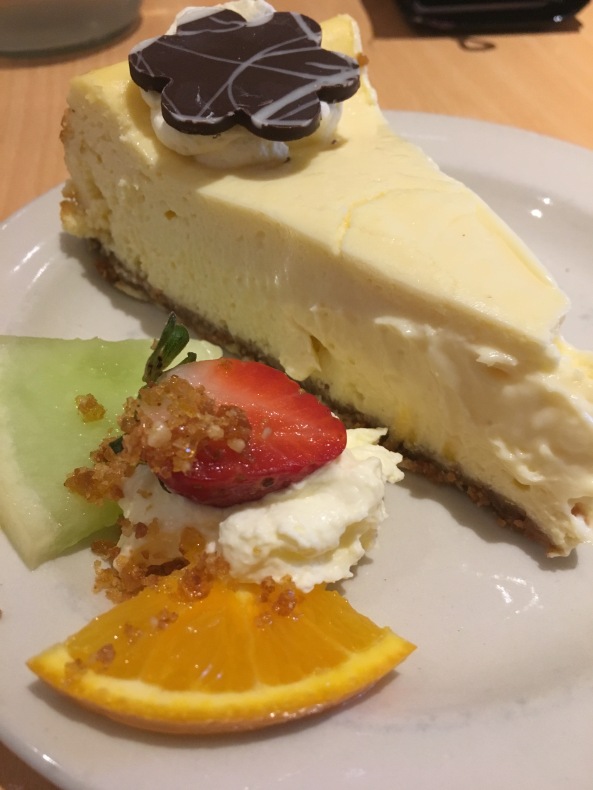 Now again, Im not a cheesecake fan, however Hubby is a devout cheesecake follower.   Baked is not his first choice.   Today though, one could not help but be impressed by the superb softness of this dessert.  It was incredibly soft and light.   Nothing like your usual shop brought baked cheesecake, definitely one of the nicest I have ever tasted!

With the final dish over, and after a chat with the friendly owner, it was time to move on, if we could!   For their $25 per head birthday special, this had been an awesome lunch experience.

Stop by when in Strathpine, the food here wont disappoint, nor will the friendliness of the staff and if you’re lucky, owner Earl will be on hand to have a chat.

Upon entry and before we left New Zealand recently, our choice for overnight stopovers was the Novotel Auckland Airport.   As a Le Accor Club Member, access to special rates, meant I was able to score a couple of very good deals for the nights we required.  Not a bad view from the rooms either!

Located directly across from one of the main doors at the Auckland International Airport, there is no need to catch a cab, simply stroll across the crossing and enter the massive rotating door.

Accommodations are very comfortable here.  The rooms themselves are designed for short stays and certainly do meet this purpose.    Not ones I would recommend for a long stay, simply due to the space within the rooms themselves.  However, when you arrive in Auckland off an international midnight flight, before leaving again at mid morning, they were ideal.

The Square Restaurant, pictured above, is expansive, with the super high ceilings, paired with high backed booths, giving you a luxurious feeling of space.

On our first overnight stay, we were impressed to come off the midnight flight, check into our room, and find the bar still open until 3am.    With no-one else in the bar area, it was a wonderfully relaxing place to sit and unwind with a nightcap.  Staff were superb, stopping to chat as they passed and engaging in light banter.   A nice welcome when you arrive into the country.

Buffet breakfast was fresh, with plenty of choice.   Friendly chefs have no problem cooking you eggs or an omelette if you so desire.

After breakfast, it was time repack and head off to the domestic air terminal.  Roughly a ten-fifteen minute walk from the hotel.  There is a bus which links the two terminals, however it really isn’t far, as long as the weather is nice.

Our final night in the county, we again stayed at the Novotel, this time with a few hours to enjoy a wonderful light dinner, before an early flight the next morning.   With more trips planned which will take us via Auckland, I have no doubt we will be returning to this venue.   Most certainly I will be keeping an eye out for the Le Accor Club deals as they certainly make the venue price reasonable.    We look forward to enteracting with the friendly,helpful staff in the not too distant future!

Bar Pacino , cool but where’s Al😄?  Love the venue, hosting some of the best views in Brisbane of the Story Bridge.  Add to that an awesome staff & service, no kidding they were outstanding!

Vistas, reflections, combine this with wine, cocktails and food.  Fabulous mix. I can see why this venue is popular.  Was this our first visit?  Yes, but it’s Eagle Street Pier area, the array of choice in this precinct is outstanding.  We’ve been to a few, still more to go. Secretly I love this area. Everywhere you go has a view. It’s like having a constantly moving and evolving movie, ever changing.

The food, yes menu choice is really good, but the platters, oh yes, the platters, are simply amazing.  We spent an afternoon, and, to be fair, that could have been a lot longer if not for a prior booking elsewhere.

We’ve had platters, and, they are a favourite.  It’s not like having a full meal, here you get to pick and choose,in this case, an amazing array of hot and cold food 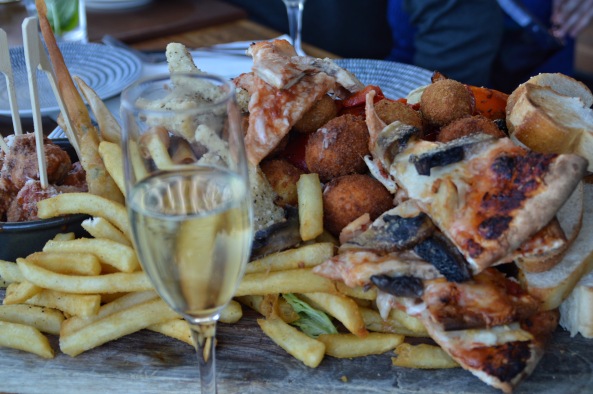 This platter was for five, however even 6 of us just couldn’t quite do it.  Now you have seen what Hubby eats, it’s not small. Even he could not order anything over and above this platter. That’s saying something.

We loved this venue,  one big plus, no one bill per table, just go to the bar, order and pay, the wonderful staff will deliver directly to your table. 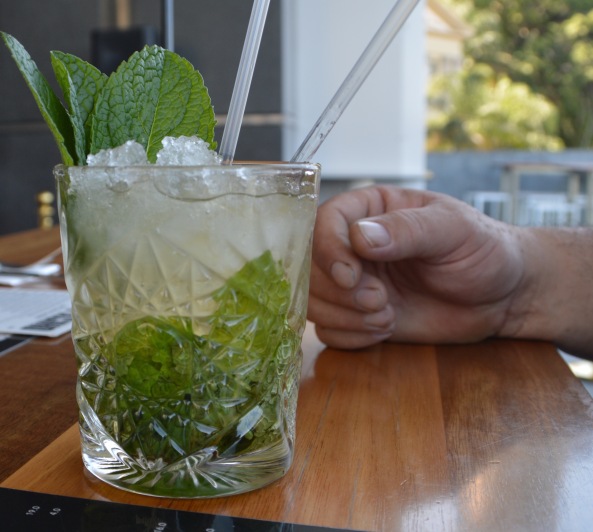 However, Nutella shots are somewhat of an icon for this venue. Nothing like a round for the table.  After all, when in Rome…..

You should visit. It’s a wonderful venue.    Looking forward to returning, as not many places you have quality service, food, venue and the opportunity for an awesome experience.. Try it👍