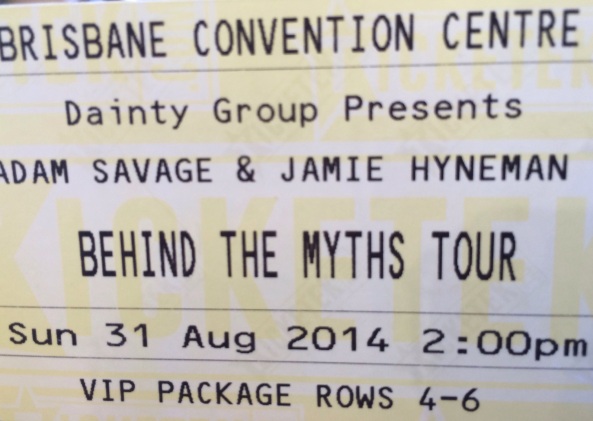 “Failure is always an option”. Adam Savage’s quote, given to his crew, embroidered on caps, as Christmas gifts, has become a MythBusters war cry. The variety contained within their TV series has been extensive, to say the least.

These guys have tested many myths from putting a bull in a china shop (not a real china shop), to trying to work out escape methods from a drowning car, blowing up machinery, even exploding pants, and making a balloon out of lead. Their fan base ranges from wide eyed children through to the more mature kids who cackle delightedly at antics of the MythBusters, all secretly wishing they could have a crack at one, just one experiment. I am quite sure the instruction of “don’t try this at home”, actually interprets as ” don’t’ you wish you could do this..? “. Each time Jamie or Adam issue this instruction, I see a gleam in my husbands eye as he muses over a way he can do it.. ..it’s just the getting away with it part that stumps him…….

Jamie Hyneman, sporting his trademark handle bar moustache and beret, stood firmly on the stage. His mainly monotone voice, is synonymous with this show . Adam has compared him to a walrus on a couple occasions, even showing side by side clips of a walrus and Jamie swimming, with a lot of similarity! Adam is the outgoing, excitable half of the duo. Talking with his hands while Jamie maintains his solid position.

Jamie, reveals during the show, he was the one chosen to do this series. His feeling was he would be boring, causing people to tune out, so he decided to think about who he knew, that he could work with, and had a personality. Adam was his choice. Together they make up the iconic, original Mythbusters team.

As stated by Jamie, ” That’s what we do on Mythbusters, we blow crap up.”

Beneath the frivolity, big bangs, explosions, hilarity and inflicting pain on each other, lies a woven mat of science . Not only do the Mythbusters bust the myths we have all wondered about, they teach the world science through their sometimes outrageous experiments. But they still enjoy blowing things up, with some pretty spectacular bangs, including exploding a concrete truck.

During the show, the subwoofers were turned up to maximum to create the bass for their clip on explosions and big bangs. Bodies shook involuntarily, eardrums bounced, walls waved, and I’m sure some show patrons even bit their tongues! All this from the big booms travelling throughout the theatre. We had now established the subwoofers worked! 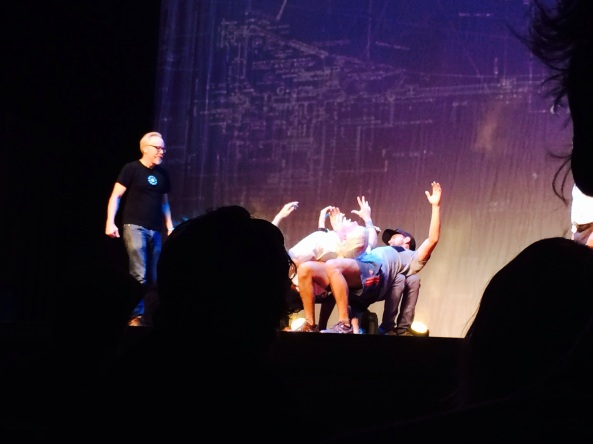 This group of intrepid fellows, were the first volunteers onto the stage. Something they probably should have regretted, if it weren’t for the excitement of being on stage with their idols. These four started sitting on chairs before lying back onto each other’s knees. The chairs were removed and waving like a conductor, Adam orchestrated the moves of the interlocked group to walk sideways and even start to turn in a circle. The relief upon the volunteers faces when they were allowed to collapse, was very evident!

The combination of hilarity, dryness, science and opposing personalities, drew all of the audience in. Jamie’s monotone is somehow mesmerising, and the entire show was definitely a hit.

Volunteers were eager to be called onto the stage to participate, others were disappointed that the waivers they grasped at the end if their extended arms whenever volunteers were requested, didn’t earn them a free pass to the stage. Even those who didn’t make the stage, still thoroughly enjoyed the show.

In true MythBuster style, the show wound up with a bang. As they were not permitted to blow things up in the convention centre, Jamie & Adam resorted to paintball. One poor guy was clad in the iron suit used by the MythBusters when they tested shark theories. A huge screen was wheeled out in front of the stage to protect the audience, with the knight in shining armour, taking his position in the middle.

Adam brandished a massive paintball gun, firing off a couple of shots. Not to be outdone, Jamie disappeared off stage, returning with a massive multi barrelled machine gun on wheels. With an evil laugh he demonstrated the pure power and speed of the paintball machine to the expectant audience. His demonstration was well received and heavily applauded. The light from the gleams in the eyes of this more mature kids, lit up the area. I think I would also be correct in saying, 99% of those in the audience, gasped, cackled and stated ‘I want one!!!” I know my more mature kid, in the shape of my husband did!

All in all a fabulous show. Maybe the reception received in Australia will encourage a return trip. After all, the idea for the show, and the production of all MythBuster Shows, originates in Australia, even though they are filmed in America. A neat fact shared by Jamie which not many people seemed to know.

Happy MythBusting people, enjoy those shows, whilst everyone dreams of owing one of these…… 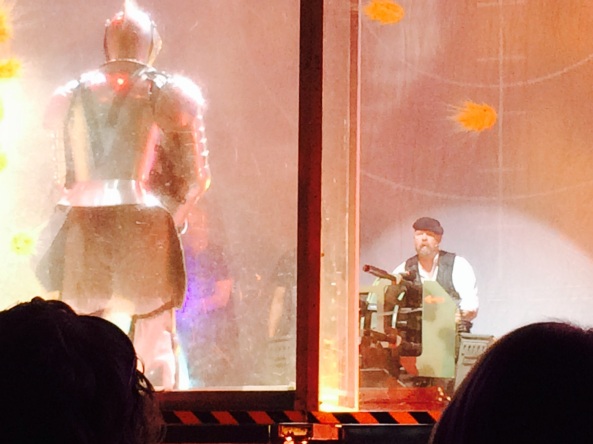 2 comments on “MythBusters- Behind the Myths Tour”