Wood, corrugated iron, signs, flags accompanied with the smell of grilling steak and the sound of scraping of chairs on the wooden floors. We haven’t been to Hoggies for a while, this visit being for a birthday celebration dinner.

Normally we like to spend a little time at Hogs Breath for a mid afternoon break. Few places stay open during the time between lunch and dinner service, which is why we have enjoyed the odd lunchinner here. Always a lot more relaxing between those two busy meal service times, with less customers around, making it a relaxing way to chill out for a couple of hours. Especially on an outside table if it’s a nice afternoon.

This time, we missed the quiet afternoon chill out as we attended an early evening birthday celebration. Which, certainly changes the whole atmosphere of the restaurant.

Inclement weather forced us to seek shelter in the warmer, more inviting inside area tonight. Seated at a booth as opposed to a table, I’d have to say whoever designed the booths, didn’t do it for comfort. I guess it is a good way to ensure a quick table turnover, which perhaps was the idea behind the rough timber bench seats. Ultimately this could increase the daily takings as opposed to those who linger. Hmm maybe there was some thought put into these booths after all 🙂 .

The menu is extensive here, with a lot of focus on their speciality slow cooked prime rib steaks. Over 18 hours these are slowly cooked before they are finished on a char grill with a high temperature searing. The result creates soft and juicy meats which you partner with salads, veges, baked potatoes, hog tail or normal fries.

To start with we ordered boss hog mushies accompanied by the finger food combo. Even if you are not that keen on mushrooms, these lightly crumbed, salt & pepper mushroom pieces were deliciously soft and tasty. Calamari, stuffed baked potato, spring rolls plus crumbed chicken, make up this combo. 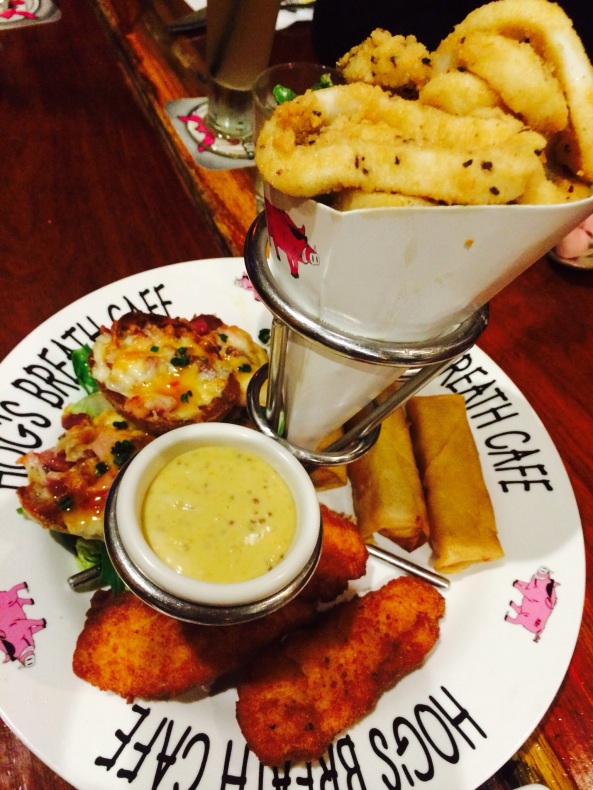 The chicken was a nice surprise, as it appeared dry, however, the look was deceiving given it was beautifully tender.

Our main meals included their tower for two, made up of steak, ribs, chicken , bacon, and in our case, salad with mashed potato. Presented as a three tier meal, this one is not for the faint hearted or the small meal person. Very, very filling! The chicken avocado meal and steak special of the day were I’m told, nicely cooked and good meals, with the exception of a baked potato which was a little undercooked in the middle.

Since we’d made it this far, and given this was a birthday celebration in which were had already over indulged, we decided to finish with the large shared Hoggies Rocky Road sundae. Featuring eight scoops of ice cream, chocolate mud cake, whipped cream, marshmallows, topped with toasted coconut. Quite an undertaking which four of us couldn’t finish! Also lucky that birthdays don’t occur every day.

Overall impressions, food was good, well presented, tender and tasty. Service was ok, nothing spectacular but sufficient. The cocktail list was well enjoyed by our table…… In fact the drinks menu presented a good variety except tea. Half a dozen coffee choices but only two teas, with no green tea available. Not a big one, however given the tea was tea bags, it probably wouldn’t cost much to include a couple of other choices.

Looking forward to returning for an afternoon cocktail one day. Keep in mind, there are different locations for this chain restaurant are throughout Australia.